With a convincing win in the final spectacular race run in glorious sunshine and big seas off Nieuwpoort, Checkmate XV (1985 Humphreys) and her crew of owner David Cullen, Darragh O’Connor, Nin O’Leary, Jonathan Sargent, Aidan Beggan, Niki Potterton and Frank Rothchild of the Howth Yacht Club claimed a well deserved overall victory in the 2018 Half Ton Classics Cup.  For Checkmate XV this was the third time she had earnt the right to have her name engraved on the Half Ton Classics Cup (equalling the legendary Swuzzlebubble’s record) and for David and his team is was their second win, the first also being here in Nieuwpoort in 2015

The final race was a cracker, sailed in a 14-16 knot westerly, huge seas and glorious sunshine. The first start was recalled so Race Officer Paul Charlier pulled out the U Flag and on the second attempt everyone behaved. It was nip and tuck all the way with Robbie Tregear’s Per Elisa (1992 Ceccarelli) initially heading the fleet from Philippe Pilate’s General Tapioca (1978 Berret), Checkmate XV, Toni Stoschek & Janne Tukolas’ Superhero (1988 Andrieu), Tom Florizoone’s Red Cloud (1981 Joubert), Paul Wayte’s Headhunter (1984 Van de Stadt) and Jonny Swan’s Harmony (1980 Humphreys). But the Irish team dug deep and by the final turn for home Checkmate XV had a decent lead with Per Elisa, Harmony and General Tapioca now hard on her heels. At the finish Checkmate XV took the race by 52 seconds, with Harmony second from Per Elisa and General Tapioca fourth. Sadly a technical issue with the committee boat’s anchor made a second race impossible and so the championship closed with eight races completed.

In his thank you speach at the prize giving David Cullen made a few special presentations of his own before reflecting that “Being a Half Ton owner is a bit like being a heroin addict, you don’t really enjoy it but its very hard to stop! And a lot of that comes down to the camadareri in this room and in this class.” It was a sentiment that clearly hit the right note with the assembled crowd and he then went on to particularly thank Class Chairman Philippe Pilate and Class Secretary Bert Janssen for all their work in driving and supporting the Class.

In the Vintage IOR Division Albert Pierrard & An Callens’ A+ (1985 Nissen) had a superb last race loving every minute of the downwind sleigh rides, with Waverider second by 47 seconds and Nicolas Lejeune’s Skippy’s Ton (1984 Briand) third. At the Prize Giving it was confirmed that the first ever winner of the new Vintage IOR Trophy was the local Belgian boat Waverider sailed by owner Jaques Lemaire, Michael Gendebien, Thibout de Kenchous, Michel Lefebure, Stephove Putseys, Winnie Berteloot and Pascal Aboosha. Ivan Van Burm’s Fantasy (1980 Humphreys) took second place by a mere half point from A+ in third. 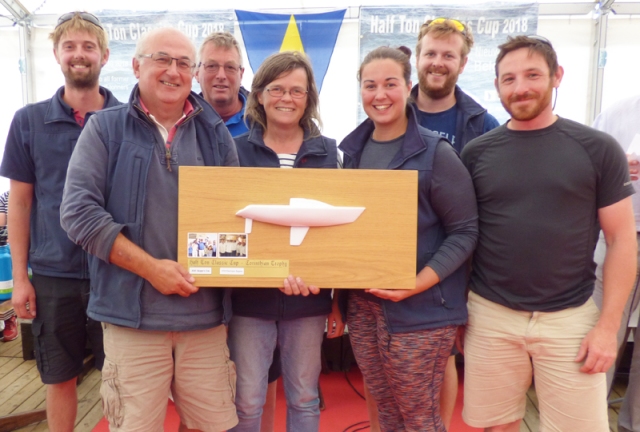 Alongside the main trophies two further special prizes were also announced. The first was the Half Ton Classics Cup Corinthian Trophy, which goes to the top performing all amateur crew and was won by Rampage (1985 Briand) sailed by owner John Hicks, Rod Wootton, Will Parkinson, Mike Chamberlain, Becky Leach, Jane Hicks and Joe Cable from Cornwall, UK.

The final prize presented is always the Spirit of Half Ton Trophy and it goes to the team who best embody that certain hard to define something that sums up the true heart of the Half Ton Class. For rescuing and totally rebuilding their boat against all the odds after she was almost completely destroyed when a crane fell on her some three years ago, this year the Spirit of Half Ton Trophy was presented to the Florizoone family and Waverider. Waverider is a truly special Half Tonner; designed by Laurie Davidson in 1977 she won two consecutive Half Ton Cups in 1978 off Poole and in 1979 off Scheveningen. Her reconstruction has been a work of love and dedication by the Florizoones and their friends and family, with the support of Tom Florizoone (Red Cloud), Ian Van Burm (Fantasy) and Jacques Lemair (better known as the carbon-master). This week Jacques has been helming Waverider with his Sorcier Noir (Black Witch) team. Waverider is a wooden boat so first she had to be put into a jig and left to settle back into shape before the rebuild could start. That work could only begin a few months ago and took the team until the night before the regatta to complete. The very first time the boat sailed after her relaunch was the first race of this championship, so this was a hugely popular win and the entire team involved came to the stage to raucous cheers and applause.

There were thank yous to the many volunteers and sponsors who have made the event possible and every team taking part was called forward to receive gifts and prizes before Master of Ceremonies Bert Janssen confirmed that the next Half Ton Classics Cup will be held in 2020 and will be hosted by the Royal Ocean Racing Club in Cowes (dates to be confirmed). Finally Commodore Baudouin Meyhui of the Koninklijke Yacht Club Nieuwpoort thanked the competitors, wished them safe journeys home and hoped that they would all be back in Nieuwpoort again very soon.