The Richard Of The Day Award 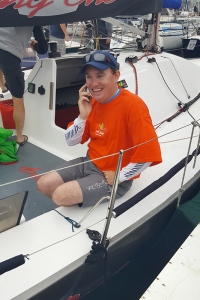 As regular followers of the Half Ton Fleet will know the sailors have a wry sense of humour and love nothing better than gently taking the Micky out of each other. This week we have a very special daily award, which for the purposes of this column will be know as The Richard Of The Day Award.  Each day the competitors are asked to nominate their favourite snafu of the day and a secret committee (OK – its actually regatta chair Dave Owens) selects the winner.

The awards are “sponsored” by Fat Willy’s Surf Shack and the winner is presented with a pair of stickers which must be displayed on the boat for the duration of the regatta and the orange Fat Willy’s T-shirt which must be proudly worn by the responsible crew member for the day.

At last night’s daily prize giving in the marquee the award for the first two days of the regatta were presented.  Day one’s Richard went to King One for their spectacular failure to check their lifeline lashings resulting in four of the crew getting an early bath just off the start line of race one.

And in an astonishing coincidence day two’s Richard also went to King One for their spectacular effort in firstly leaving their spinnaker ashore in the car when then set off from the dock, forcing them to come scurrying back in a panic to collect it, and then for blowing it out just after they hoisted it on the first run.