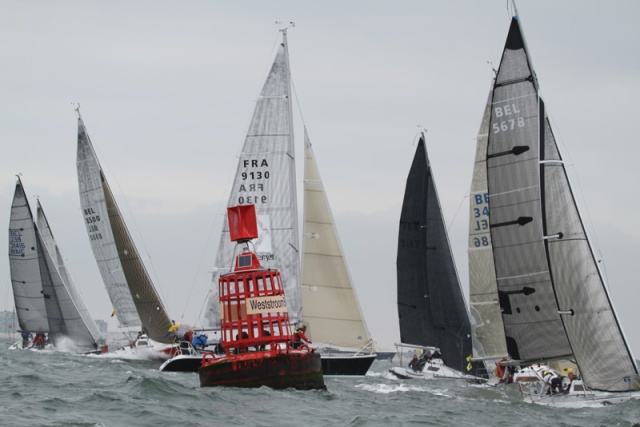 Day four’s Long Inshore Race at the Half Ton Classics Cup 2018 in Nieuwpoort, Belgium, proved to be both an incredibly closely fought battle between the top boats and a game changer in the overall standings. With the race carrying a weighting of 1.5 points and being non-discardable, and with only two further races still to sail the pressure was on everyone to achieve good results.

The morning dawned overcast once again, but as the boats arrived in the race area the wind was already at 8-10 knots from the south west and building. Race Officer Paul Charlier set a course which would take the boats back and forth along the Belgian Coast going as far west as the Nieuwpoortbank Buoy and as far east as the Binnenstroombank Buoy off Oostend, giving a course of 32 miles, which took the leading boats over five and a half hours to complete.

Having started cleanly at the first attempt and with only a short distance from the line to the laid weather mark the fleet converged in a tightly bunched pack. Philippe Pilate’s General Tapioca had a small lead as they approached, but underestimated the tide and understood so had to tack onto port to get round. Behind them David Cullen’s Checkmate XV had judged the starboard layline perfectly and Tapioca had to tack back before she had really got pace up to avoid them. Tapioca just made it round the mark by bearing away hard to keep their transom clear, but then made the mistake of staying low when in fact the tide made the leg a starboard one tack beat. Checkmate held high, rapidly rolling Tapioca with Toni Stoschek & Janne Tukolas’ Superhero, Albert Pierrard & An Callens’ A+ and Jonny Swan’s Harmony right on their tail, followed by a big gaggle of boats including Patrick Dubus’ Ballarine (who hit the laid mark), Tom Florizoone’s Red Cloud and John Hicks’ Rampage. 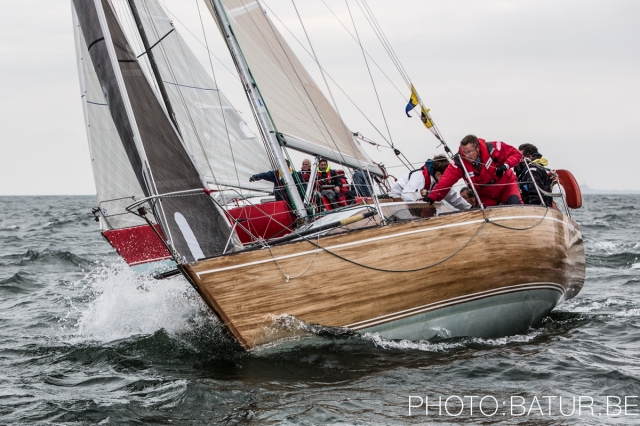 Those who spotted Tapioca’s mistake and held high on the short second leg made it across to Westroombank in one starboard tack, but those who went low were forced to tack in on port making for plenty of excitement in the final approach. Checkmate had a couple of boat lengths lead and was followed round by Superhero with Tapioca now down to third, Harmony fourth, Robbie Tregear’s Per Elisa fifth and A+ sixth.

The next leg was a tight reach to Middlekirkbank with the building ebb tide making it tighter still, and judging the compromise between hight and pace was the key to success. While Checkmate hit the middle ground to defend her position Harmony, Tapioca and Per Elisa stayed low as others went high. As they came round Middlekirk Checkmate had successfully defended her narrow lead, but the decision to go low had paid off and Harmony was right behind her with Tapioca third and Superhero fourth. Red Cloud had sailed an excellent leg to pull up into fifth with Per Elisa sixth and A+ seventh. 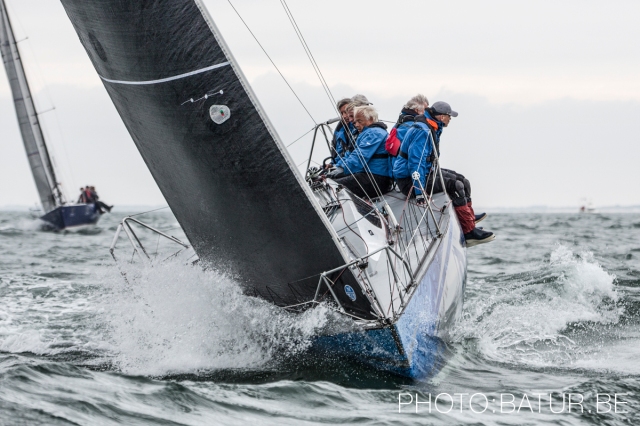 Next up was a port one tack beat to D1 where they tacked round onto a predominantly starboard tack beat over to Neiuwpoortbank. Choosing where to put in the short tacks on the leg to Nieuwpoortbank was critical with a number of boats loosing out and others gaining significantly. As they turned downwind A+ had picked the tacks perfectly to lead, but with Tapioca, Checkmate XV and Harmony yapping at their heels.

On the leg to D1 Rampage was making good time until their guard wire snapped and all the hiking crew found themselves taking a surprise dip. Fortunately everyone managed to hold onto something so no one lost contact with the boat and they were rapidly able to self recover and continue racing, although General Tapioca and several others were in immedate radio contact and standing by to offer assistance if needed.

From Nieuwpoortbank the fleet bore away onto a fast reach for WK3 before bearing away again onto a long run back past Nieuwpoort to Binnenstroombank off Ostend. With the wind now gusting up to 20+ knots it was a spectacular surfing leg with a few thrills and spills along the way. One unexpected thrill and near spill happened to Jan-Jakob Muyls’ Farther Bruin (Farr 1977) as they came to the leeward mark. A tourist boat had come out from Ostend and decided to watch the racing, but got a little too close to the mark blocking their way and avoiding action had to be taken. Quite what the tourists all thought of the mad Belgian’s apparently piroueting in front of them we do not know, but for sure they were not happy with the ferry captain!

The final beat west back to finish at the Westroombank against the tide gave the option of sailing up the middle of the beat over the bank or going left and hitting the shallows inshore. A+ chose the shore and more than 20 gruelling tacks later they had passed five boats. 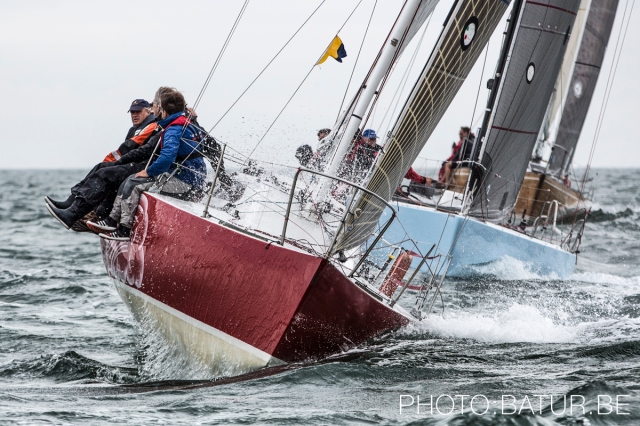 At the line General Tapioca led the fleet home followed by Checkmate XV and Harmony, but on corrected time Checkmate XV had taken a comfortable victory by a minute and fifty two seconds. It wasn’t until the boats were ashore that second place could be confirmed with Harmony beating General Tapioca by just two seconds. The stonger winds suited the Vintage IOR boats which still sail in close to original IOR configuration and despite their encouter with the tourist boat Farther Bruin sailed a superb final leg to take fourth place overall and first Vintage from Jacques Lemaire’s Waverider in fifth. Red Cloud was sixth, Superhero came home seventh and overnight leader Per Elisa was eighth, her worst result of the regatta.

With the Long Inshore having a points weighting of 1.5 its results have shaken up the overall leader board.  David Cullen’s Checkmate XV now moves into the lead with 18.5 points. Tied on 23 points are yesterday’s overnight leader Robbie Tregear’s Per Elisa and Jonny Swan’s Harmony with Per Elisa taking second place on count back. Jacques Lemaire’s Waverider is just 1.5 points behind them in fourth with Tom Florizoone’s Red Cloud in fifth on 27 points and Toni Stoschek & Janne Tukolas’ Superhero now dropping from second to sixth on 28.5 points, still well within striking distance of the podium. 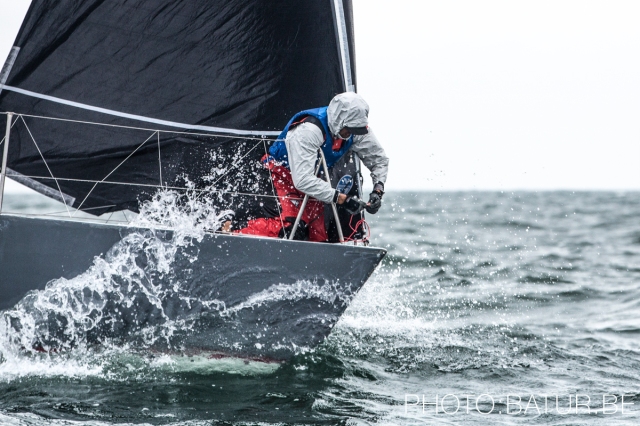 In the Vintage Divison for boats still sailing in largely IOR format (limited modifications to their rigs and foils are permitted) Waverider continues to lead the fleet and now has an almost unassailable lead of 9.5 points. Ian Van Burm’s Fantasy is in second place, 3.5 points ahead of A+ and four ahead of Nicolas Lejeune’s Skippy’s Ton. The Vintage fleet is newly introduced for 2018 and is proving a popular new addition with some terrific racing amongst the fleet and a super camaraderie amongst these owners who enjoy the challenge of maintaining their boats as close to original as possible.

After racing the crews came together for the traditional Half Ton Classics Cup Gala Dinner at the  Koninklijke Yacht Club Nieuwpoort. But before that they all took part in another Half Ton favourite – The PopPop Boat World Championships. PopPop boats are traditional little tin boats which are steam driven using a tealight to heat a tank of water to drive a propeller. They get their name from the distinctive noise that the tiny single cylinder engine makes and they race along a special twin track course. Despite nearly eight hours afloat today the teams threw themselves into the competition and the usual attempts at cheating ensued, but ultimately fair play was achieved and the Rampage crew narrowly beat the Checkmate XV crewed to be declared 2018 PopPop Boat World Champions.

The championship concludes tomorrow, Friday 24 August. Although technically three races remain to be sailed, the fact that racing can’t start before 10.30 and that there is a final race start cut off time of 13.00 means that in reality only two races are really possible to decide this closely fought series and decide who will take home the Half Ton Classics Cup this year.