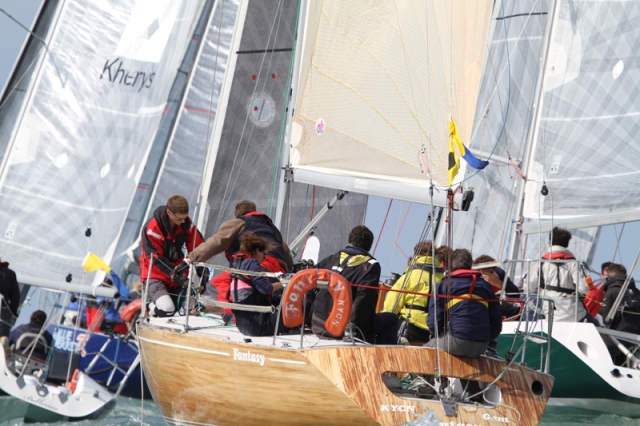 What a difference a day makes! After the grey skies and light winds of the first two days, day three of the Half Ton Classics Cup 2018 in Nieuwpoort brought a distinct change of pace for races four to six in the series. Whilst skies were still overcast for the first two races of the day, the wind had already begun to pick up. Race four offered up a fairly consistent five to six knots, for race five it was building to 6-8 knots and by race six the sun was out and the breeze was edging into double figures for a glorious finish to the day.

The change of pace brought some new faces to the front of the fleet and gave others a challenge. Jonny Swan’s Harmony hit the front for the first time up the first beat of race four and then hung onto her lead all the way to win by forty seven seconds on corrected time. Toni Stoschek & Janne Tukolas’s Superhero and Tom Florizoone’s Red Cloud had a superb battle for third which Superhero won by a single second. Overnight leader Robbie Tregear and his crew sailing Per Elisa took fourth with Ian Van Burm’s Fantasy fifth.

Race five was Superhero’s from the off. They came off the line with pace, shot up the first beat like a scalded cat and finished the race with a two minute and eight second lead. There was an all Irish dog fight for second and third between David Cullen’s Checkmate XV and Harmony. These two are old rivals and with two superbly drilled crews they clearly enjoyed sparing at close quarters. Checkmate eventually got the upper hand by fourteen seconds. Per Elisa was fourth again with Jacques Lemaire’s Waverider fifth.

It took two attempts to get race six underway as the fleet almost universally preferred the pin end and there just wasn’t room for all of them so out came the general recall flag. Pretty much the only boat clearly not over the line was Per Elisa who had pottered gently in at the committee boat end all on her own.

Determined to get them away at the second attempt the race officer brought out his U Flag, meaning that any boat on course side of the line within the final minute of the sequence would be automatically disqualified from that start. Sadly Per Elisa was not as cautious on her second start and she and Father Bruin found themselves out of the race.

With the wind now into double figures Checkmate XV found her form and romped home for a win by two minutes and forty seconds. Once again the chasing pack had an increadibly close race and this time it was Harmony who bested the rest, beating Waverider into third place by eighteen seconds. Red Cloud took fourth, General Tapioca fifth and Superhero sixth.

In the overall standings with six races now completed Robbie Tregear’s Per Elisa retains her overall lead with eleven points, while four boats are separated by just a single point for second and third. David Cullen’s Checkmate XV and Jacques Lemaire’s Waverider both count seventeen points while Toni Stoschek & Janne Tukolas’s Superhero and Tom Florizoone’s Red Cloud both count eighteen points, with each pair only seprated on count back in that order. Two further points adrift and still very much in contention with up to three races still to sail is Jonny Swan’s Harmony.

In the Vintage IOR Class, which has been introduced this year to recognise boats still sailing in largely original IOR format, Jacques Lemaire’s 1977 Davidson designed Waverider continues to lead the fleet by four points from Ivan Van Burm’s Fantasy, a 1980 Humphreys. One point behind Fantasy and tied for third place are Nicolas Lejeune’s 1984 Briand designed Skippy’s Ton and Albert Pierrard & An Callens’ 1985 Nissan designed A+.

Thurday’s fourth day of racing will feature the long inshore race, which has a 1.5 points weighting, and with the forecast offering a good south westerly, which is expected to build from around 13 knots up to 17 to 20 knots by late afternoon, it should be a good day for some longer distance racing.

After sailing the sailors came together for the daily prize giving where the Harken Winch Handles and Spinlock Deckvest Lifejacket were presented to the race winners. Also presented was the Henri Lloyd Concours d’Elegance Trophy, which is presented to the boat deemed by a secret committee to be the most beautifully presented at the regatta. After much careful inspection of this year’s entrants, many of whom are looking absolutely spectacular, the committee awarded the trophy to Paul Wayte’s modified and meticulously maintained HB31 Headhunter.

Also joining the Half Ton sailors on day three was Belgian Laser Radial Olympic Bronze Medallist Evi Van Acker who joined the all girl crew of Half Duke to make a presentation promoting “Mothers & Midwives Support”, the charity they are promoting through their participation this week’s. Mothers & Midwives Support is gathering funds to finance an ambulance boat for the Monvu Hospital and the Idjwi Island in the Democratic Republic of Congo. Their presentation included a short video on the work of the charity and the lives of the Idjwi Island community and the Monvu Hospital, for whom the ambulance boat will provide a vital lifeline. Evi is a patron of the charity and spent time speaking with the sailors and their families about the charity’s work and why this ambulance is so important.

The evening continued with a delicious crew dinner of Belgian specialities Waterzooi, a stew of fish or chicken, and Stoofvlees, a beef stew, which were both declared to be delicious and were washed down with plenty of Belgian beer.

The championship continues until Friday 24 August and will feature a mixture of windward/leeward, short coastal and long coastal courses, with a maximum of three races being sailed each day.