The penultimate day of the Henri Lloyd Half Ton Classics Cup, sponsored by Savills and Mylor Rigging and Chandlery, could not have been more different to it’s predecessors. Dawn broke with not a breath of wind, glassy seas and a heavy mist that persisted throughout the morning, causing Race Officer Jack Penty to hold the boats ashore for a couple of hours. Fortunately the mist cleared and a light west south westerly filled in so that by 12.30 the start for the first of the day’s three races was in progress. 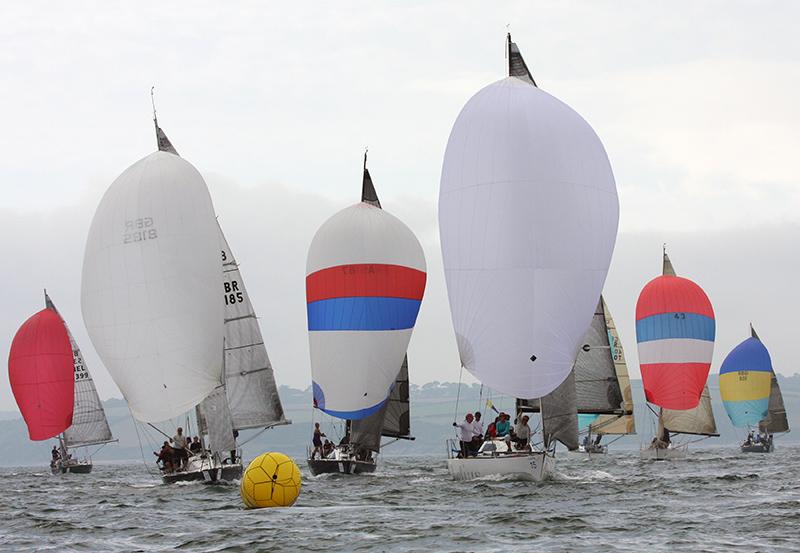 It took two general recalls followed by a start under the U Flag, meaning a 20% penalty if anyone had been over the line, to get the fleet away on race seven of the series. Once running it was a tricky windward leeward as the boats tried to pick their way around the shifty developing breeze. Mike Evans helming The Big Picture made the best of the situation to win by 19 seconds from overnight leader Greg Peck sailing Swuzzlebubble, with Paul Pullen’s Miss Whiplash third and Jean-Philippe Cau and Claude Charbonnier’s Sibelius fourth. There was a dead heat for fifth between Jonny Swan’s Harmony and Patrick Boardman and David Kelly’s King One. 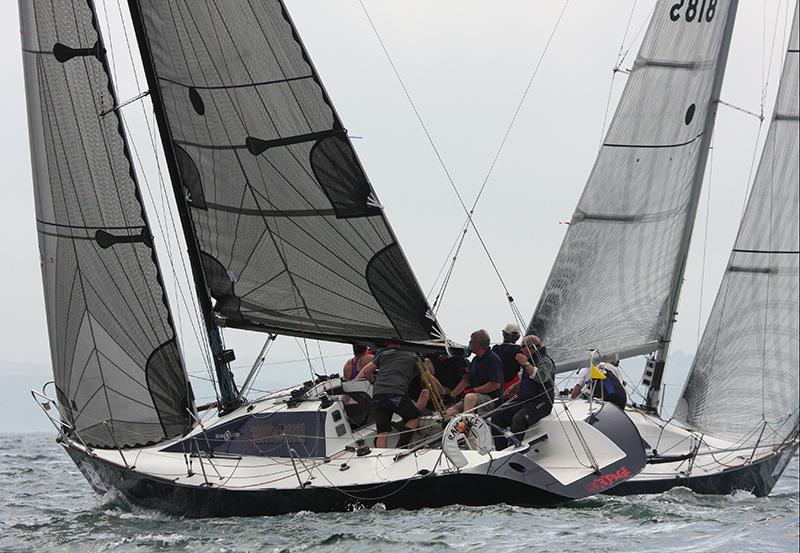 With the breeze still refusing to build beyond single figures the race committee rolled straight into race eight. The patchy and shifty conditions meant there were big gains and losses to be made and at times it looked more like a game of snakes and ladders than a yacht race. Swuzzlebubble’s experience and local knowledge stood her in good stead and she won by eight seconds from David Cullen’s Checkmate with Miss Whiplash third, Francis Marshall’s Concorde fourth and Harmony fifth.

A regatta course was set for ninth race and it was nip and tuck all the way with Harmony winning by a mere four seconds from Swuzzlebubble. Mel Sharp’s Demolition finished third, her best result of the series, with King One fourth and The Big Picture fifth. 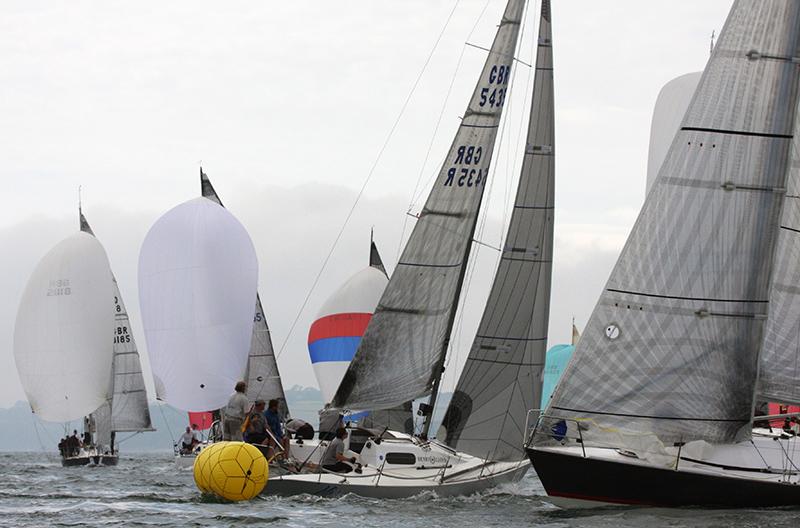 With nine races now completed a second discard came into play. Greg Peck’s team of old friends aboard Swuzzlebubble consolidated their lead with a five and a half point delta over second placed Miss Whiplash. Harmony holds onto third with the gap between her and Miss Whiplash now at nine points. The Big Picture jumped up the leader board from sixth to fourth, just three points behind Harmony, while Sibelius added a pair of disastrous seventeenths to her race seven win, dropping her down the score board into fifth overall, half a point ahead of Checkmate.

After sailing the crews came together in the Regatta Marque for the Championship Dinner which featured a delicious paella supper, some fantastic fancy dress outfits, plenty of Half Ton cameraderie and a huge warm welcome for Paul Strzelecki, CEO of event sponsor Henri Lloyd, and his wife Jenny who arrived at the event in time to watch race nine.

With dinner over everyone repaired to the National Maritime Museum Cornwall for the daily prize giving, giving them the opportunity to view the museums special Olympic display which includes two of Ben Ainslie’s Gold medal winning boats as well as many other historic Olympic exhibits. 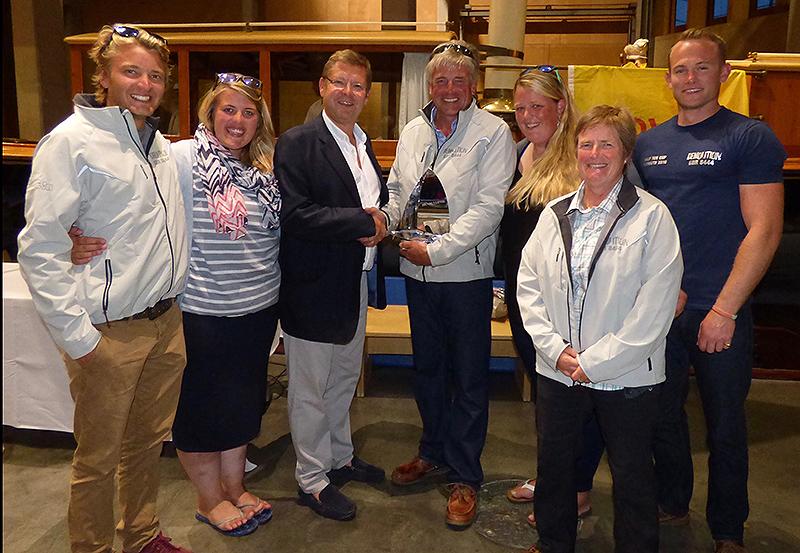 Jonathan Cunliffe of Savills presented the daily prizes and then Paul Strzelecki made a special presentation to the winner of the new Henri Lloyd Concourse d’Elegance Trophy – for the best presented boat at the regatta. All the boats are kept in exceptional condition so to win this award the boat must be a true stand out. To huge applause the trophy was awarded to the beautifully restored Demolition owned by Falmouth based Mel Sharp. Demolition was designed in 1980 for Larry Marks, who took her to that year’s Half Ton Cup in Sandham where she finished just outside the top ten, and is now raced by Mel and his crew of friends and family. 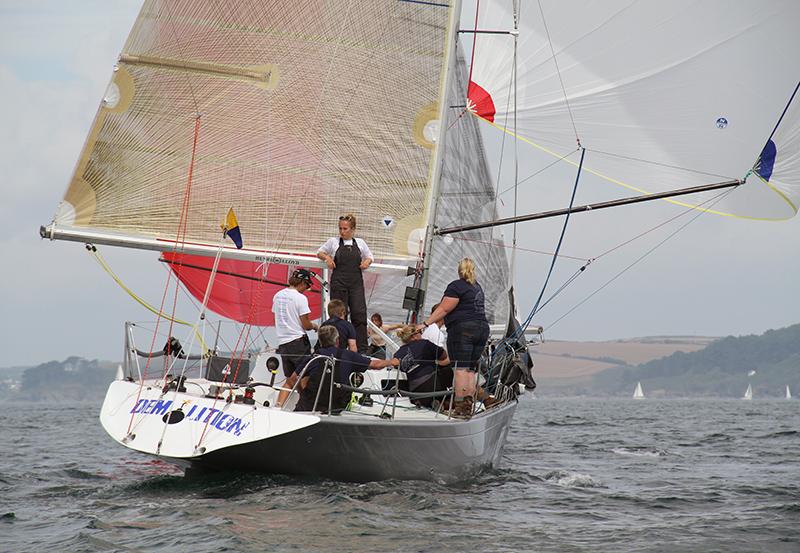 In theory tomorrow’s final day will feature up to three further races however, the weather forecast is anticipating some very strong south south westerly winds which are expected to build from around twenty knots in the morning to almost 30 knots with gusts of up to forty knots in the afternoon. Every effort will be made to complete the remaining races and the Race Committee has called a formal meeting with the skippers to review conditions first thing in the morning and agree on a racing plan for the day.

For full results and further information about the Henri Lloyd Half Ton Classics Cup 2016 please go to: