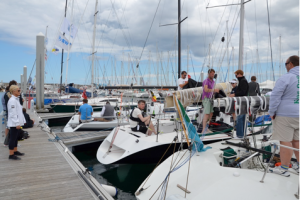 An international sporting event
From 7-11 July the 2014 edition of the Half Ton Classics Cup will take place in Saint-Quay-Portrieux, Brittany, France. More than 200 sailors are expected to come to the start line! France, Britain and Belgium will be present, but also teams from Finland and Ireland… There will be training races on Monday 7 July and the main championship racing will run from 8 au 11 July, when the overall results will be announced and the prizes presented at the closing ceremony.

The courses will be a mixture of windward/leeward and coastal courses. The boats will be racing under IRC handicap to allow for the fact that the fleet incorporates half toners from various different eras.

Note: on the afternoon of Tuesday 8 July, the racing will be visible from the southern breakwater of the Port d’Armor and thre will be a commentary on the racing. On the same day the SNSM (French lifeboat service) and the Office of Maritime Affaires will be holding an awareness day to inform visitors about safety at sea; the aim of the day being information and prevention. Finally on Friday 11 July, from 21.00pm in the Jardins du Port, there will be a special final night concert with the will known sea shanty group Avis de Grand Frais in the Festival Place aux Artistes.

A new look for the Sport Nautique de Saint-Quay-Portrieux (SNSQP)
François Coudray, director of SNSQP, emphasises the fact that this is a new beginning for the club: “Until last year, we organised mainly match races, consisting of successive duels. But with this type of racing now being ‘out’ of the Olympic competitions, we decided to take a new direction and we are now focusing on fleet regattas. And the 2014 edition of the Half Ton Classics Cup is a great opportunity for us to add a new dimension.”

A real team effort
For this edition of the Half Ton Classics Cup, there is a true team spirit between the SNSQP, the town of Saint-Quay-Portrieux, and the commercial partners, Casino and Port d’Armor,… who have been working together for many months to offer participants and spectators a great event. Partnerships with local companies have been created to welcome the competitors and their families and spectators, there is strong involvement from the community, especially in terms of communication to give this race the profile it deserves, and, of course, there is the flawless organisation fo the SNSQP and its director François Coudray.

Where the beautiful people gather
There will be beautiful people on the waterfront of Saint-Quay-Portrieux this summer. Not only will there be the winners of the 2003, 2009, 2011 and 2013 editions, Superhero (Andrieu 1988), Concorde (Berret 1989), Per Elisa (Ceccarelli 1992) but the very last three Halfs built will be in attendance, as well as the mythical 1978 Berret design Brittany Drizzle. Also of note is the presence of Peter Morton, who has successfully resuscitated Swuzzlebubble (Farr 1977), which was a near wreck less than a year ago and has just arrived from Britain by ferry.

A family atmosphere
Although the competitors constantly strive for superiority on the racecourse, there is above all a convivial and family friendly atmosphere surrounding the regatta. Launched in 2003, the Half Ton Classics Cup has played a key role in the revival of interest in IOR (International Offshore Rule) boats, and in particular the famous tonners – quarter ton, half ton, three quarter ton and also the one tonners. The philosophy of the founders, which is to maintain the spirit of yesteryear, making minimal or no changes to the original plans, has certainly helped to preserve many halftonners in a condition as close as possible to that at the date of their original launch. The coming together of race boats and veteran sailors from the last century along with sharp young crews, has the distinction of bringing together a tasty and fascinating mix of amateur sailors and mythical prototypes which is trans-generational in all its diversity. Although the races are hotly contested, its not the final victory on the water that matters most but the Half Ton True Spirit Trophy, which is the most coveted of the trophies and is awarded by the participants and organisers to the boat which most embodies the “spirit of the halfs”. New for this year is the introduction of the Infinity Cup which will be awarded to the first boat crewed entirely by amateur sailors.

For the duration of the event there will be a dedicated exhibition space installed on L’esplanade du Nouveau Port.

English language event updates will be available from the Half Ton Classics Cup Blog and Facebook.

This entry was posted in Half Ton Classics Cup 2014. Bookmark the permalink.